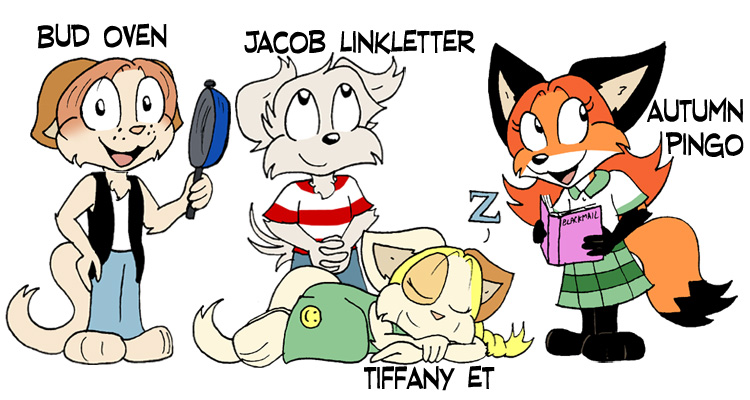 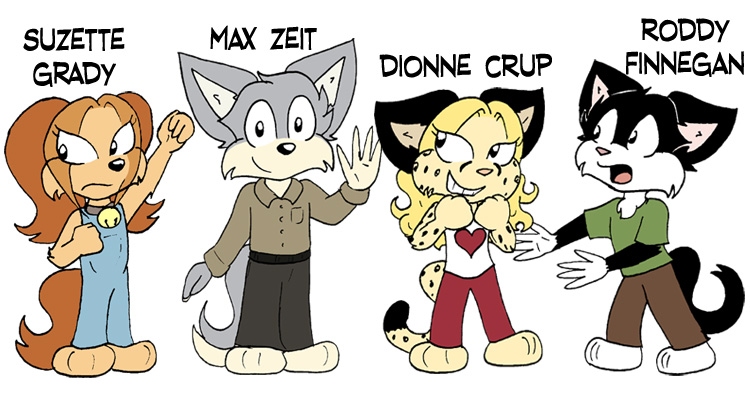 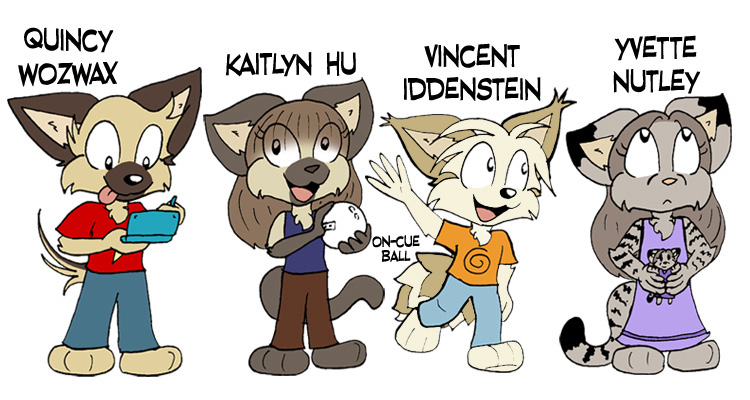 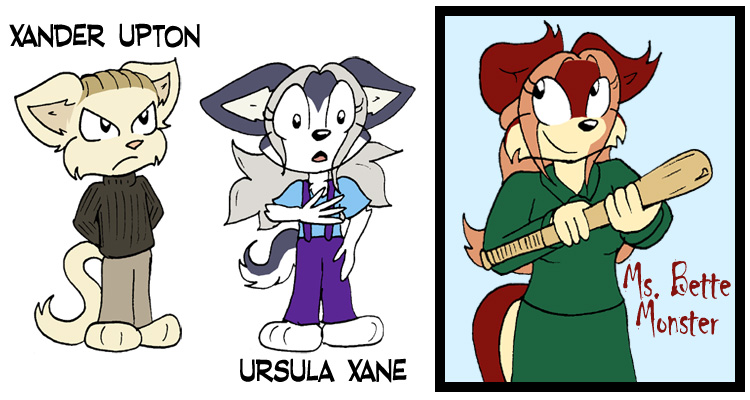 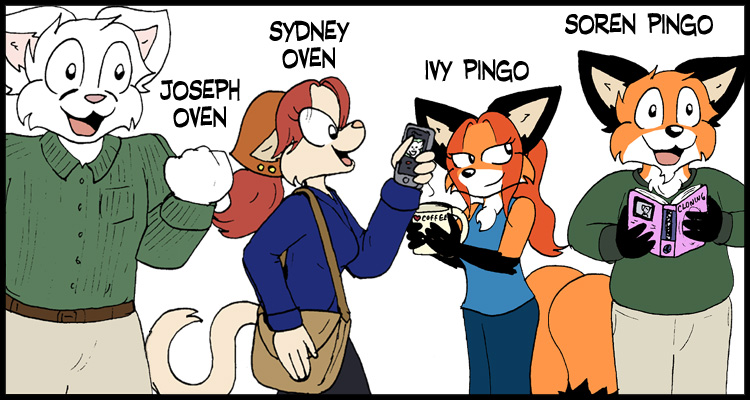 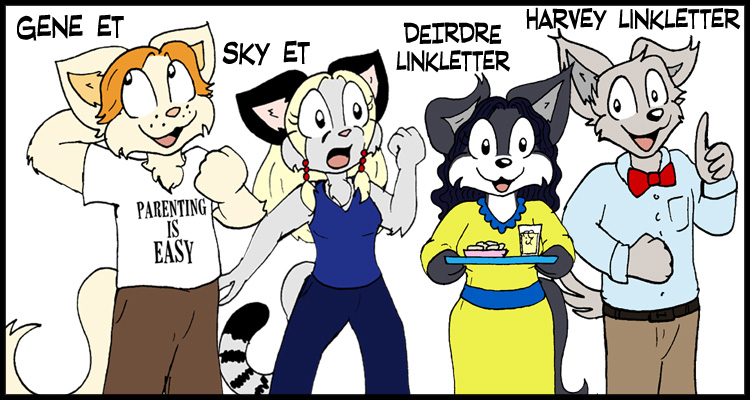 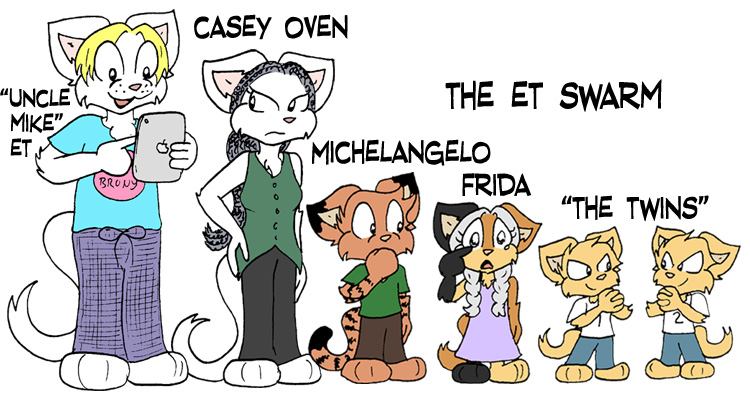 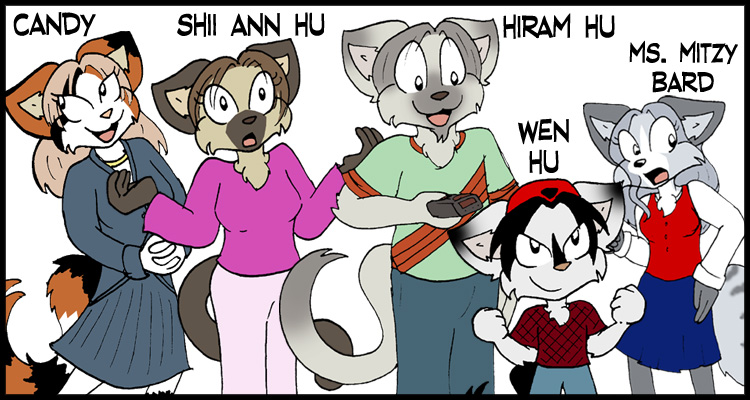 Below is the old cast page, with ancient art and bios. It has to stay up until a proper replacement is ready, but I apologize for it. 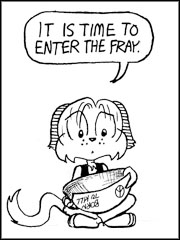 Bud thinks of himself as an idea man, which often means he sees mundane chores and details as beneath him. Energetic and impulsive, this kitty (with Scottish fold ears) tends to rush into grandiose plans with little thought regarding if they are feasible and/or legal. As he is easily distracted, most of his plans go unfulfilled - but it's the vision that matters! Because his parents are rarely around, Bud has learned to fend for himself. He's not much for cleaning, but he has developed into a frighteningly-skilled chef from years of cooking for himself. The clubhouse in Bud's backyard serves as home base for the children's plans.
� 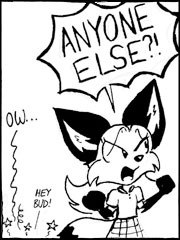 Autumn's family moved to Sapphire Lake so she could be around other gifted children. As a smart child in a regular school, a bored Autumn proved to a dangerous thing. Now that she's among her peers, Autumn is free to be herself. Her scary self. While her parents may have hoped the other kids would ground her, Autumn instead found other like minds. The little red fox can finally reach her full, devastating potential! She has an acerbic wit and dark sense of humor. Accustomed to dominance over others, sometimes her competitive side gets the best of her. Autumn views life as a game - a game that must be won! What? You don't think so? That's loser talk!
� 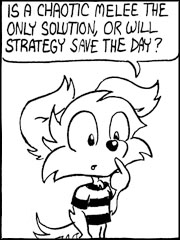 Jacob is kind, hardworking, studious and trusting. When he becomes involved in something, he always gives it his best effort - regardless of the importance of the task. He always tries to be the best friend he can be to others. Unfortunately, due to his na�ve nature and loyalty, this mostly means he is enlisted as lackey by stronger-willed children. Still, this good-hearted mutt is always willing to help out. His tendency to get carried away can easily turn him from the voice of reason to the one leading the charge in whatever cracked endeavor the kids have planned. He loves athletics, even if he's rather clumsy in his playing. Jacob never gets the respect he deserves; but, thankfully for him, virtue is its own reward.
� 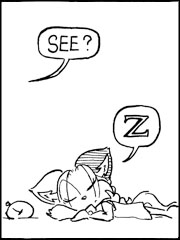 Flighty and absent minded, it sometimes seems this calico cat floats around the world with little idea of what is going on around her. When something does grab her attention she can become focused - but good luck trying to talk to her when she's in that state! When she gets going, she proves herself quite skilled and productive. Tiffany aspires to be an artist, although she is not certain which type of art to pursue. Might as well try everything! Combine this with poor impulse control, and the world is her canvas! For some reason, everyone seems to hold Tiffany in high esteem even though she's rather unreliable and her wandering attention can make conversation difficult.
� 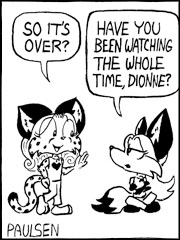 Capitalistic and Machiavellian, Dionne is not afraid to use her gifts for profit. She views deception and manipulation as a sport. In competition, she is a merciless and fearsome adversary. A pageant girl, Dionne despises the whole process and finds it rather sick. Even so, she takes malicious glee in competing with (and often defeating) other girls whose entire lives are devoted to pageantry. This pretty cheetah mix is all predator, frighteningly capable of chewing you up and spitting out, regarless of whether you were an enemy, ally or innocent bystander. Dionne is actually quite honest about her dishonesty. To her victims, that provides little solace.
� 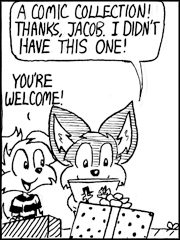 Max is the biggest kid in the class and by far the best athlete at the Poppinstock Academy. He's charming, kind and humble. This wolf could easily be the alpha male, but Max holds back to let others play. What fun is there in sports when you win every time? As can be inferred from his residency in the upper class Diamond Bluffs, Max's family is well off. Naturally, his family is known for philanthropy, using its wealth to aid charities and support local organizations. Max doesn't have a mean bone in his body. He can always be counted on to say a kind word about anyone. Heck, he's just about perfect. Truly, this means he's history's greatest villain.
� 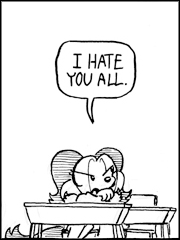 Very aware she is the only Poppinstock Academy student from Gemstone Estates living in the working class Emerald Woods, Suzette is prone to rants about class warfare. Always the self-righteous one, this spaniel takes every opportunity she can to rant and rave about something. Suzette is the type of feminist who spells "women" with two Y's. She's read several summaries of feminist essays without bothering to check the author's background, read any rebuttals or even, you know, read the actual essay. For Suzette, there's no problem a good double standard in her favor can't solve. After all the discrimination her kind faced over the years, history owes her something, dangit!
� 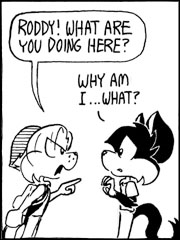 Ambitious and meddling, Roddy is an achiever who wishes to be involved in everything. Roddy is the only outsider who is able to infiltrate the group on a semi-regular basis. He cannot stand the insulated nature of the Gemstone crowd and their refusal to even acknowledge the existence of kids outside their group. This tuxedo kitty is blessed and cursed with the ability to do just about everything well. This means he will always be competitive, but will always lose to kids who are specialized in the task at hand. The result is he often looks worse than he is; which just gives him further motivation to cause problems.
� 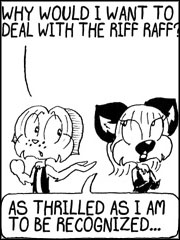 Living on Copper Road, close to the Poppinstick Academy, Kaitlyn is geographically the closest to the main characters, but that doesn't do her much good. The only sane kid in the class, Kaitlyn has her own band of ruffians with which to deal - not that we get to see 'em much. Perhaps *cough* a spin-off strip is needed for her! She is the common bond with all the non-gemstone kids in the gifted class. The main cast may usually ignore her, but this is of no consequence to Kaitlyn. This Siamese kitty can have her own adventures!
� 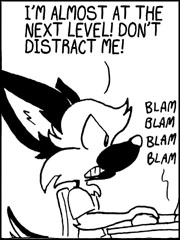 A geek and a gamer, this German shepherd strives to always have some method of escapism to help in dodging that pesky reality. Shameless about his geekiness, Quincy has been known to show up at school wearing a wizard's cape. He does live action role playing to stay fit, but can mostly be found wandering around a massive multiplayer online role playing game as an orc warlord. His character has had some run-ins with Gene Et's character, resulting in bad blood between them. It's best not to mock Quincy over his passions, because he is proud of his life and can get quite indignant if challenged.
� 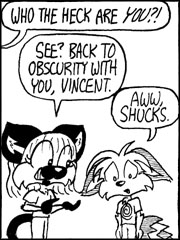 Vincent means well, but he�s simply� a mess. Clumsy, enthusiastic and highly distractible, this lovable mutt unwittingly brings chaos wherever he goes. Odds are he�s got a pretty severe case of undiagnosed Attention Deficit Disorder. Vincent is always happy to help out friends. Whether that help is actually helpful is up for debate. As much as Vincent would love to be acknowledged by the Sapphire Lake kids (especially Autumn), he just can�t seem to break through and get their attention.
�

The Adults of Precocious:

She's a hard-edged, dark-humored businesswoman, always in the city managing the two apartment buildings she runs. He's a hulking eccentric and part-time guidance counselor who likes to lock himself in the basement with his many hobbies. Together they're� NEVER AROUND! Neither have any real domestic skills, but that's what Bud is for. Always the unconventional pair, Joseph took Sydney's surname when they married. (Hey, would you want to saddle your kids with the name Brungster?)
� 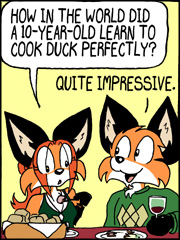 They say the Pingos reproduce by cloning. This could be true. If so, Autumn is destined to grow into a witty librarian. There are worse fates. Of all the parents, Ivy is the one who best understands the children's demented minds. Could she be remembering her own childhood tricks? Soren is equally perceptive, but far more unflappable. He prefers to sit back and display his wry humor instead of stepping in and disarming the children.
� 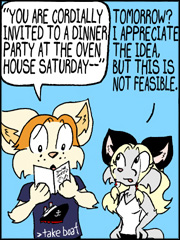 Gene was born lucky. Never having much ambition, he somehow stumbled into a high-paying job in which no one checks on him. He spends his days playing games on the computer and reading webcomics! One fortunate night, fate stepped in again to lead him to his lovely wife. Sky had *lots* of ambition. She had grand hopes and dreams! She also had a shotgun wedding and five children in the next seven years. This may not be the life she had planned, but she loves her family and will do her stressed best to keep it running! You'll forgive her if she sometimes lacks social graces. Those little hellions can wear one out!
� 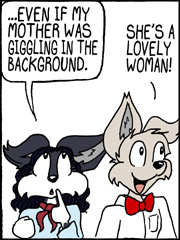 In this age of sarcasm, you forget such sincere and sweet people exist. Harvey wears a bowtie unironically and still thinks email forwards are the pinnacle of humor. Deidre heads the PTA, homeowners' association and competes in baking competitions � all without any power tripping, social maliciousness or corruption. These people can't be real!
� 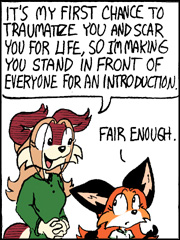 Ms. Monster teaches our class of insane children. She's been teaching this group long enough to know how they tick, and knows when to step in and disarm them and when to step aside at let the inevitable explosions happen. Bette is friends with the Et parents and the three are a dangerous combination. She does have a wild side she tries to keep from the kids. She doesn't, however, hide the joy she gets in tormenting the little brats!
�